"In the sweetness of friendship, let there be laughter and the sharing of pleasures."
Khalil Gilbran

Skiing last weekend was brutally cold.
Lovely to have 26 inches of fresh snow but some sun and blue skies would have been welcome too...
Even the kids were asking, "where's Spring?" 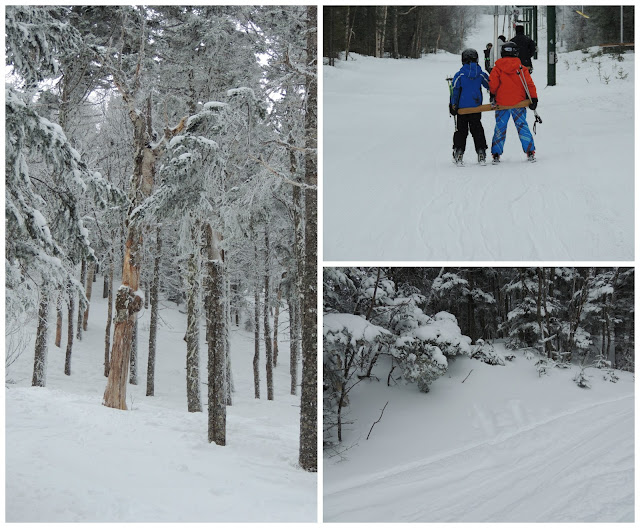 We left the mountain early for Maple Maine Sunday.   An annual event where maple syrup producers open up their doors to show how maple syrup is made, offer tours of their sap houses aka sugar shacks, and sell their wares direct to visitors.

Even with modern technology it's such a labour intensive craft and the method hasn't greatly changed over the years. We stopped at Day Mountain Farm and the owner, Collin Neil, a twinkly blue-eyed old Mainer explained the process of tapping (boring a hole through the bark) into a tree once it's about 40 years old and extracting the clear sap. This is then boiled up to yield the sticky sweet goodness that most of us pour over breakfast pancakes! In days gone by he'd have used a simple metal spout and bucket. These have been replaced with plastic tubing and industrial looking evaporator/distiller pans.  The boys hung on to every word he said (actually, so did lovely hubby and I!).  We missed the cooking bit as they started early that morning and had already boiled up 600 gallons of sap. We did peek at the last bit of syrup in the evaporator pan. It smelt and looked yummy.  It takes 30 - 40 gallons of sap to make 1 gallon of syrup!  Tapping season starts in the Spring and lasts 4 - 6 weeks. There are all sorts of interesting facts about the whole process, including the role syrup played in history, on wikipedia or here and here.  One bit to share with you:  sweetness depends on the weather, so this year's crop should be good - something positive about the long, cold winter!

Before buying some syrup - half a gallon each of dark and of light, we finished up our tour with a tractor ride around the sugar bush.  Kept our eyes peeled for bear, deer or moose who apparently like to nibble on the pipes, but we just saw lots of maple and birch and the pipes weaving through the trees!

Driving home, the boys munched their maple candy and we all agreed it was a fun couple of hours and that next year we'll try to make it in time to watch the boiling process.

Tanya
Hello and thanks for stopping by! I’m English but grew up all over the world and so it was no surprise to friends and family when 9 years ago I left London with my American hubby. We live in a beautiful historical town on the New England coast. Our house is full with children (2 boys aged 8 and 4), animals (a dog and cat, fish tank, frog and a snail, plus numerous wildlife running through the back-garden!), vintage and modern finds, books and collections gathered from our travels, sewing and craft projects, house renovations, family and friends from near and far, good food and wine, and much love and laughter. Join me as I share my tales of being an english mum amongst moms, and as I venture back into making and selling things: life as I sort out a house full of many things! x Tanya